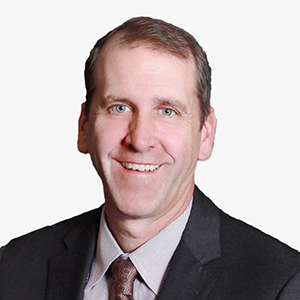 David Flicek is the president and chief executive officer of Avera McKennan Hospital & University Health Center in Sioux Falls, SD, and the chief administrative officer of Avera Medical Group. David has led Avera Medical Group since its inception in 2008. Under his leadership, the group grew from seven employed physicians and advanced practice providers to more than 1,000 in over 60 specialties.

David has 30 years of health care experience. He previously served as senior vice president of clinic operations at Avera McKennan and earlier worked at Allina Health. David is involved in many community and professional organizations. He has been a board member of the Sioux Falls Chamber of Commerce, the South Dakota Symphony Orchestra and LifeSource, and he volunteers with the National Kidney Foundation of South Dakota. David holds a bachelor of science in health administration from the University of South Dakota.